An international group of fifteen scientists recently published an article in the scientific journal Frontiers in Marine Science. There, an attempt is made to map algae production in Europe. According to the paper there are 447 companies involved in cultivation and processing of algae in Europe. This is the most comprehensive study of its kind ever made. The project is connected to EU Blue Bioeconomy initiative.

Authors, including Dr. Tryggvi Stefánsson from the biotechnology company Algalíf in Iceland, found a total of 447 such companies in 23 countries in Europe. The companies are roughly classified into three categories; those that process seaweeds and macroalgae, those that grow the blue-green cyanobacteria Spirulina or those that produce microalgae. Algalíf, Dr. Stefánsson’s company, for example, falls into the latter category.

Just over half of 447 companies produce microalgae or Spirulina, while just under half produce macroalgae. In that part, France, Spain, and Ireland are the largest in terms of number of producers. The majority of the 225 companies who work with macroalgae, use what grows wild, but about a third are in cultivation.

When it comes to microalgae or Spirulina, it is almost exclusively cultivated. Spirulina manufacturers in Europe are 222, divided between 15 countries but most of them are located in France, Italy, Germany and Spain.

Most of the companies are small or start-ups

There are 74 microalgae producers, most of them in Germany, Spain and Italy. In total, such production takes place in 16 countries. Some companies are in both in microalgae and Spirulina cultivation, or 33 companies. Most of these companies are small or on pilot scale, especially when it comes to the production of microalgae.

Algalíf in Iceland is one of the largest microalgae companies in Europe, producing more than 10% of all microalgae biomass in the continent according to the information from the paper. Algalíf also seems to be far ahead of most others in technological expertise, sales systems, and production stability.

According to the authors of the paper, there is a real possibility of a great and bright future for cultivation and algae processing in Europe. But at the same time, it is important to pay close attention to environmental challenges, especially regarding the utilization of wild algae.

Only a few companies in algae cultivation have achieved significant success it seems, in terms of stability, profitability and efficiency, and Algalíf in Iceland is one of them. The company produces astaxanthin which is used as a dietary supplement and in various other products such as cosmetics. This one company produces more than 10% of all microalgae biomass produced in Europe.

The article can be found by clicking on this text or on the logo below. 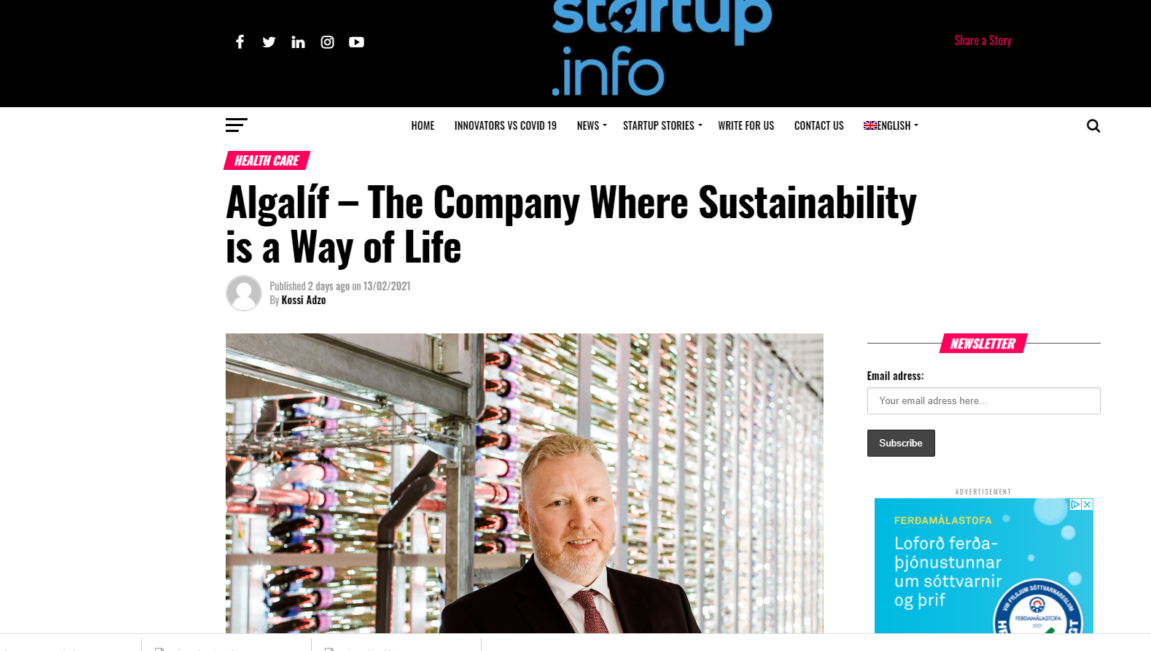 Where sustainability is a way of life

By Svavar Algalif in the media, News

Startup.info is a very popular and cool entrepreneurial website that over 100,000 people read weekly. This week, they are running a big story on Algalif, and an interview with Orri Björnsson, Algalif´s CEO. The main news now is about Algalíf and sustainability.

It is great to see all the hard work from the staff and management result in such an elaborate and great coverage.

Click here or on the picture to read the article. 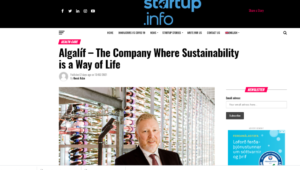